The ruins of a Gothic castle built in the 13th century and destroyed in 1644. 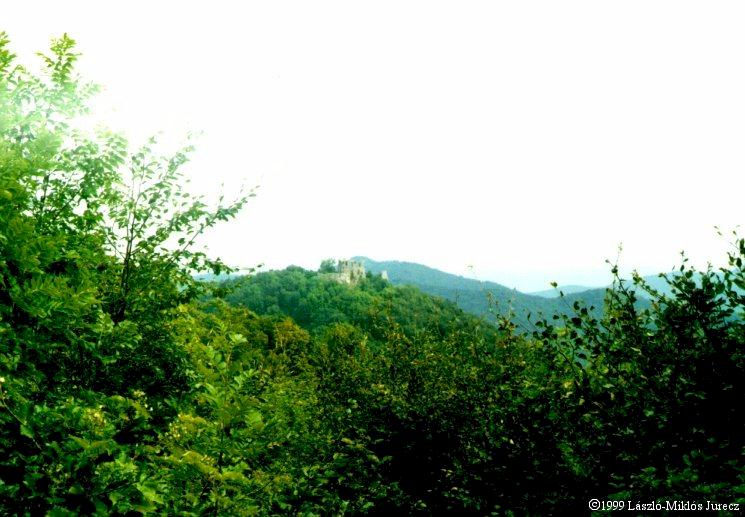 South of the village Jasenov.

The ground plan of the oldest part of the castle refers to the period of it’s foundation, consisting of a perimeter fortification with a triangle floor plan and a square tower by the entrance gate. The access road lead by the southern defence wall, sharply turning left under the tower and runing towards the castle gate, which was between the eastern corner of the tower and the perimeter fortification. It was protected cleverly this way the battlements as well as the tower. Besides the stone-built structures, there must have been wooden buildings for habitation and economic use in the castle’s own interior as well. In this form, the castle with it’s appurtenant manor became the property of the Druget(h) family during the years 1317 - 1327, owned by them as far as 1644. The new owners began gradually extending the castle. At the turn of the 15th and 16th century they ordered to build a new defence annulus with two cannon towers on the most accessible, north-western side. A massive cannon bastion was built beneath the older square tower, with it’s inner walls tapering funnel-shaped and lying immediate to the south and east walls of the older tower, through which lead the double secured entrance do the older core of the castle. The east defence wall was lenghtened as far as the the wall of the cannon bastion and the former entrance was canceled. A smaller circular cannon tower was built on the north-west side. To the left of it, a new main entrance gate was established. The section between this tower and the huge bastion was secured by erecting a defence wall, which curved north of the entrance gate and strained to the older defence fortifications. Another bailey was formed this way. The former north-east perimeter bulwark was secured by a new wall too. Despite that the fortification system was very good, it was strenghtened and improved already in the half of the 16th century. A horseshoe-shaped cannon tower was constructed in the area of the the new bailey, as a direct defence not only for the first entrance gate, but for the double secured passage and the entire bailey as well. The north-west area beneath the original perimeter fortifications was strenghtened with two parallel defence walls. Another defence wall stretched from the huge bastion with two thirds the length of the original perimeter and contributed to the partial extention of the castle’s east side. At the beginning of the 17. century, the construction of a more modern, star-shaped bulwark, which stretched nearly around the castle’s entire perimeter, began... The torso of the masonry from this last-built and the outer perimeter surrounding fortification is preserved along with the ruins of the castle till today... The crumbling-away ruin of the castle was partly conserved, several objects were roofed and the entrance part tidied at the beginning of the 20th century, as a result of Count Andrássi’s initiative. But today, there remain, f.i., already no traces after the roof repairs.

At the turn of the 13th. and beginning of the 14th century Jasenov belonged to the noble Peter, the son of Peteň from Bačkov. He was formerly an ally of the king, Charles Robert, during the period of fights with the oligarch family of Omodejs (of the Abov county). But later, because he disswore his alegiance to the king and tried to murder him, his property was thus entirely confiscated and in 1317 most of it given to the faithful Philip Druget(h). In the deed of gift we can see the first evidence of the village of Jasenov, so we can be sure of it’s existence before the mentioned year. Since then it was owned continously by the Drugeths, still their’s even in the 17th century as a part of the the domain of castles Brekov and Jasenov, (which was also known as the Humenné estate since the turn of the 14th and 15th century). The first written mentions about the castle are from the 20’s of the 14th century. In 1322, Philip Drugeth - the royal treasurer – ordered the castellan of Jasenov to inspect the ownership matters of the tool office in Sečovce. Later, in 1325, the same Philip Drugeth – now as the royal steward – authorized the Jáger chapter to territorialy circumscribe the land property of Peter, son of John, the castellan of Jasenov. King Charles Robert (of Anjou) granted additional property for Peter, son of the castellan John, again in 1327. From the mentioned documents we can clearly see, that the castle of Jasenov already existed in the 20’s of the 14th century, was owned by Philip Drugeth and was according to his order administrated by the castellan John… Because Philip Drugeth owned the surrounding properties since 1317 and before him they were in the possession of Peter from Bačkov, the castle was built more probably by Peter around the year 1300, after he gained these lands by donation from king Ladislav IV. . Philip Drugeth would barely regard useful building a new castle rightaway, for he gained other Zemplin castles from the king as well – including the nearby castle of Brekov, for instance... The geographical position of the castle, built in the mountains away from the main provincial road was suitable for the function of a noble lord‘s seat. The nearby Brekov served the more typical purpose of a guard castle in the service of defending the local land or accomodating the king on his travels. So Jasenov served as a noble’s seat castle for Peter of Bačkov and for the the Drugeths since the 20‘s of the 14th century. But it was only one of the many castles on their possesions in the 15th – 17th century. It still fully served its purpose in the middle of the 16th century, as many documents substantiate these facts. Allthough having an advantegous position, as well as good fortifications, the castle never had greater strategical significance. George I. Rákoczi’s army conquered and destroyed the castle in 1644, during the third great anti-habsurg nobility uprising. After the initiative of Count Andrássy (the last noble owner of the Humenné estate), the vanishing ruin of the castle was partly conserved, several objects were roofed and the entrance part was fixed during the beginning of the 20th century... But today, there are, for example, no traces of the repaired tower roofs left anymore...Despite it‘s humble existence, the castle of Jasenov became ingloriously famous in the 16th century, because of a secret counter-fiting coin forge. It operated after a direct inducement of the Drugeth family, under the direction of the skilled master craftsman Nicholas. The only person that rebounded on this illegal activity was master Nicholas himself, who was publicly executed in Prešov.