Ruins of a Gothic castle from the 13th century. It was destroyed in the 17th century. 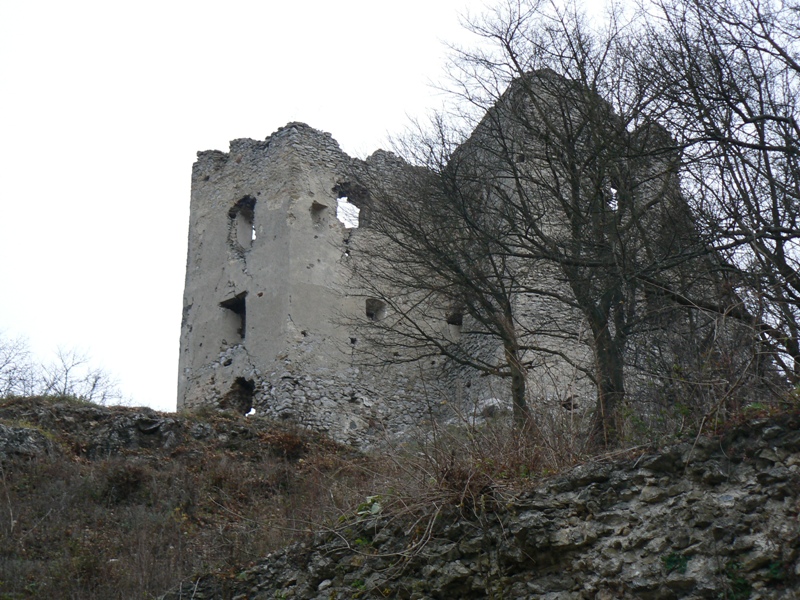 Ruins of a Gothic castle from the 13th century. It was destroyed in the 17th century.

The stone ruins of the medieval castle stand on a distinctive cone - shaped hill with limestone bedrock (480 m a. s. l.), above the village of the same name.

A Slavic fortified settlement with an oval-elipsed ground plan and an axis approximately 70 m long and 40 m wide, existed in the area of the castle hill during the early Middle Ages. The first phase of the gothic castle’s construction was focused on building an oval core situated on the highest point of the limestone rock, and an in the core integrated tower on it’s south-west side The continous course of the oldest bulwark of the core in it’s above-earth basis is well preserved till today. The south-west bulwark wasn’t originaly built into the oval shape – instead, into a corner, into which the castle’s tower was built secondary at the turn of the 13.-th and 14.-th century. A fortified structure like this, with a small expanse (about 16 x 13 m) represented a small noble’s fortress. We can typologically classify it as a castle with the so-called shell structure of the fortification walls. The second phase of construction was achieved, when the castle was the property of the wealthy noble Druget(h) family (after 1321). In the core, a two-section citadel (rough equivalent for the Slovak term „castle’s palace“, used to describe the main dwelling building of a castle) was added to the south bulwark and was strained to the original prismatic tower. On the north side of the already existing castle, a small bailey was established. During the extention of this courtyard eastwards, the older wall was removed and replaced by a new bulwark, passing through the edge of the stone plateau. This construction phase was carried out during the years 1486 – 1488, when the castle was in the hands of Stephan Zápoľský. It was probably supported by king Matthias himself, because the castle was one of the footholds in this region and in the terms of the kingdom, and guarded not just the main road, but also the not too far northern border of the country as well... At this time, a late-gothic horseshoe-shaped bastion was built into the entrance (old upper) gate and a new defence tower constructed into the east corner of the existing bailey, which became a large courtyard of the upper castle. On the west edge of the exsting citadel, a new polygonal wing for dwelling in late-gothic style was added. In it’s north-west corner, a chimney has been preserved till present. In it’s basis, a stone socle of the fireplace has been discovered by earlier archeological research on the castle. The last phase (initiated by Nicolas Druget in 1575) is represented by the construction of the lower bailey (foreyard), the new entrance gatehouse with a square ground plan and the extention of the walls between the old (Upper) and the new (Lower or ‘Great’) gate, which gave the castle it’s present-day look… The bulwark wall on the west side of the hill’s edges, in the area between the both gates, didn’t preserve itself till today, allthough it undoubtobly fulfilled a typical defensive function. The bulwark platforms stood on wooden beams, traces of which are still left as holes in the inner or outer sides of the castle’s structures. The last construction phase is represented by the renewal of the castle after being destroyed by Rákoczi’s armed forces in 1644. However, it didn’t affect the castle’s appearance too much, because it was focused only on the repairs of damaged parts of the individual structures. Because of the already mentioned reasons, the castle definitely ceased to exist in the year 1684…

In the early Middle Ages, there was a Slavic fortified settlement in the area of the castle hill. The oldest written records about the castle, as well as the village, are from the years 1307 and 1314. We can be certain from the content of both documents, that the castle of Brekov existed already before the year 1307, when it was owned by the nobles from nearby Michalovce. Most of the researchers date the initial construction of the medieval castle of Brekov into the second half of the 13. century, some of them even into the years 1295 – 1307 (1314) and ascribe it to the Michalovce branch of the noble family of Kaplon. In the written sources from 1307, it is mentioned as „castrum Barko“, later, in 1314, as „possessionis Borko simul cum castro“. The former owners ceded the castle in exchange to the notorious noble Peter, son of Petény (Pečeň, Peteň...), from Bačkov, who also owned the nearby castle of Jasenov. There are several theories of who ordered the construction of the castle and what was it’s function... With reference to the geographical position of the hill and castle, as the most likely appears the initiative of the king – the castle was supposed to serve for the protection of the nearby part of the provincial road and the borderline areas in the 13. century. At the beginning of the 14. century, the Hungarian kingdom was struggling in a civil war with the separatist oligarchs, the Omodej family from eastern Slovakia (...their homeland was the Abov county...) and Matthew (Matúš) Čák of Trenčín from the area of Považie, who waged for the succession of the throne... Around the year 1317, an uprising of the local nobles broke out mainly in the northern part of the Zemplín county, led by Peter Petény - only a short time ago the king‘s ally - himself. After their defeat by the royal army, their property was confiscated and the castle of Brekov (along with other ones) given by royal donation to a french-neapolitan family – the Druget(h)s. They were the faithful companions of the king already during his arrival to the Hungarian kingdom and remained on his side during the entire time of his reign. After the king‘s donation to them, the Drugets took over most of Petény‘s former property, most of which were located in the northern part of the Zemplín County... Because they chose nearby Humenné as the seat of their family, they used the nickname „Homonnay / de Homonna“ („from Humenné“) ever since then. They owned Brekov as one of their possessions practically to it‘s very end in 1684 (with an exception of a short time between 1486-1488, when it fell to the Zápoľský family). The Drugets were largely instrumental in it‘s upkeep and further construction during both the Gothic and Renaissance period. The Zápoľský family behaved similarly, taking advantage of their short care-taking for it‘s reconstruction and improvement of fortifications... The inner-political unrests of the 15.–th century undirectly affected this castle as well. In this century it played an important role in the history of the Hungarian kingdom for two times. First, in the year 1466, during the inner-political commotions, and later by the armed encounter of king Matthias (Matej) Corvin with the polish king Casimir, near Humenné in 1473. According to historical documents, king Matthias (Matej) Corvin spent the winter on the castle afterwards. In 1472, he appointed Stephan (Štefan) Zápoľský, the hereditary governor of Spiš, as the captain for the defence of north-eastern parts of the Hungarian kingdom. In 1488, he is mentioned as „castellanus castri Barko". The Polish armed incursions in the years 1471 – 1472 and later in 1490 – 1492 led through the territory of Šariš (= one of the main counties in the northern part of eastern Slovakia). Garrisons against the polish forces of John Albrecht were held on the castle in 1491. The castle of Brekov was damaged by several sieges during it‘s rich history. The strongest damage, however, was caused in the politically and military unstable years of the 17. century, during the series of 4 great nobility uprisings aimed against the reign of the Habsburg dynasty. It came by usurpation into the hands of Gabriel Bethlen, who put it in the care of his duke, George Sečiansky. The duke was killed a year later by his own retainers. The castle belonged to George I. Rákoczi in 1644 and finally, Imrich Thőkőlyi got held of it in 1684, destroying it during the last phase of the noble conspiracy. All these violent occupations and army sieges damaged the castle greatly... It was already torn down in 1640, and even after being partly restored, it definitely came to it‘s end after being destroyed in 1684. Only it‘s ruins endure till the present...